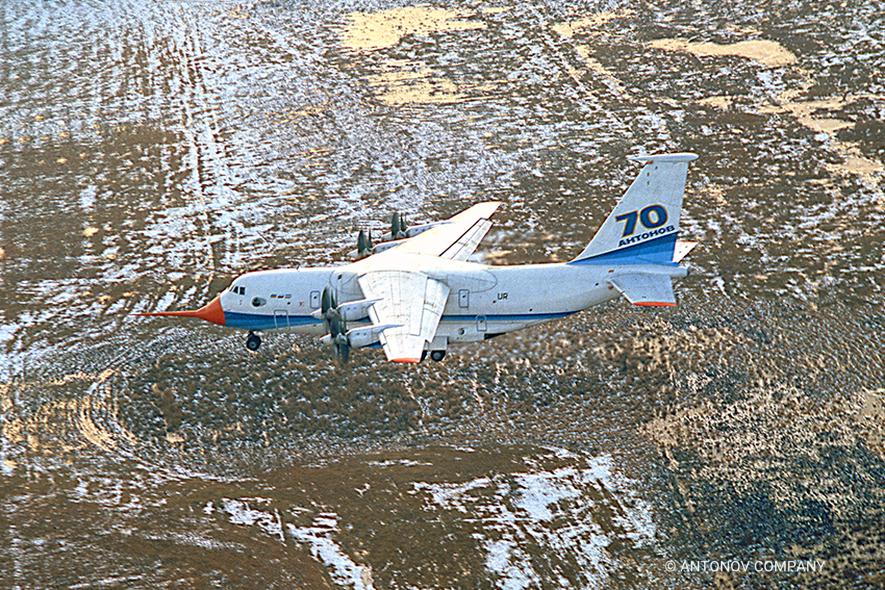 AN-70 became a real highly technologically innovative aircraft which was ahead of its time. In particular, firstly in the world, the aircraft was powered by four D-27 engines with SV-27 counter-rotating propfans.

Test programme of the AN-70 was intensive and difficult enough. The aircraft demonstrated really outstanding characteristic in test flights at high angles of attack. Due to high lift-drag ratio, which reached 7.2 in a real flight, firstly in the aviation history the heavy transport flew with minimum speed of 96 km/h.

AN-70 can perform the typical transport mission (transportation of 20 t payload at a range of 3000 km) from unpaved airfield of 600-800 m length only. AN-70 can transport almost any item of aeromobile military and engineering vehicles used by armies of the world and to deliver them to poorly-equipped unpaved runways directly to the destination point.

In comparison with the analogues aircraft, the AN-70 can perform air dropping of cargoes and parachutists with twice less scatter and its crew can guide the aircraft to the calculated touchdown point with a pin-point accuracy.

Onboard monitoring and diagnostic systems make possible the autonomous operation of the AN-70 aircraft from poorly equipped airfields without the need for any special ground facilities. Aircraft maintenance is based on the “on-condition” strategy.

At present, ANTONOV’s specialists use experience of the AN-70 creation for new transports development.

One of the advanced projects is AN-188 with payload up to 50 t. Keeping the best characteristics of AN-70, the new transport will be fitted with modern engines and equipment.